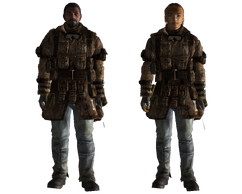 Caravan traders are two Fallout 3 characters who were not included in the final release of the game.

The traders were intended to appear in Canterbury Commons, where they would wander. They would also sleep near Dominic and Machete's house.

Despite their name and brief dialogue, they are not set up to trade with the player.

Caravan traders do not appear in Fallout 3 but still exist in the game's resources.

Retrieved from "https://fallout.fandom.com/wiki/Caravan_trader_(Fallout_3)?oldid=3081502"
Community content is available under CC-BY-SA unless otherwise noted.