The caravan shotgun is a weapon in Fallout: New Vegas.

This section is transcluded from shotgun. To change it, please edit the transcluded page.

A shotgun, also called a "scattergun," is a firearm designed to shoot a multitude of lead or steel balls of varying sizes, greatly increasing the weapon's hit potential. This makes it very effective at hunting game.[Non-game 1] However, the accuracy and power found at close range starts to diminish as the target gets farther away. Shotguns designed for the military's use are often called "combat shotguns."

This is a double-barreled shotgun that sports barrels mounted in an over-and-under configuration. It features several signs of wear and decay following extensive use in the desert and has been maintained in a makeshift manner. This is especially clear around the buttstock, where the shoulder pad has been secured with flexible, thin metal strips and duct-tape. The cracked fore-end is held to the rusty barrels with zip-ties and scraps of tightly-wrapped leather. Furthermore, they appear to have been sawed-off.

It can be a bit confusing when trying to aim with the iron sights. The target has to be placed behind the screw that is somewhat blocking the Courier's view. There are four horizontal marks on the screw; the target needs to be behind the second mark from the top. Because of that, and its large spread, this makes it very difficult to utilize slugs effectively.

The caravan shotgun can fire a total of about 695 standard shells, the equivalent of 348 reloads, from full condition before breaking. 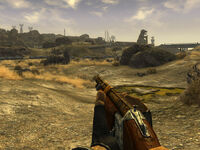 The caravan shotgun while aiming down the sights 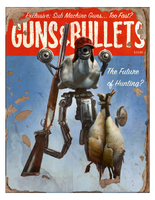