The car dealership is an unmarked location in the Capital Wasteland. It can be found northeast of the Fairfax ruins and northwest of the Red Racer factory.

The exterior of the dealership is of a similar design to surrounding industrial buildings. A water tower stands nearby, and an Enclave detachment sets up a position beneath it after The Waters of Life. The building's interior is spacious, with two vehicles on display. An administrative section is in the back, and a repair bay is built on a raised section on the left side of the room.

The car dealership appears only in Fallout 3. 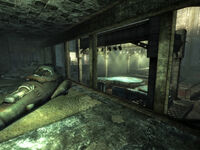 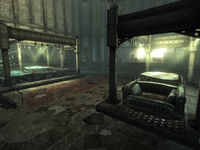