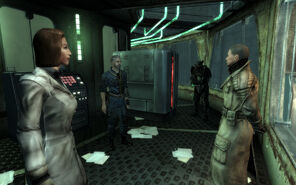 Enclave occupation and subsequent fortification of the Jefferson Memorial

The Enclave aimed to occupy the memorial and the purifier for Project Purity, and intended to both fix, and activate it themselves to distribute fresh pure water to the citizens of the Capital Wasteland, so that they would flock to them for the water, protection, and "a plan for the future". [1]

It marked the Enclave's first public action since the destruction of Control Station ENCLAVE and the fortification of Raven Rock thirty-five years prior.

After discovering a Garden of Eden Creation Kit would be needed in order to get the purifier functional, James and his child arrived at the Jefferson Memorial, along with Madison Li and her research team. They aimed to reactivate the facility and bring things up and running for when the G.E.C.K. would arrive.

During this, the Enclave abruptly landed on the scaffolding for the facility and at the pointing of an Enclave officer, charge inside of the Memorial, aiming to take it for themselves. James and a Rivet City scientist named Janice Kaplinski, locked themselves inside the purifier hub with Colonel Augustus Autumn and two of his troopers.

After failing to reach a mutual or progressive settlement, Autumn shoots Kapliniski in the head and kills her, much to the dismay and anger of James. Ultimately tricking Autumn into waiting, James sabotages the entire facility and floods the locked room with immensely concentrated levels of radiation, killing Autumn's two soldiers instantly, himself, and seemingly killing Autumn in order to secure his child and the rest of the scientists ample time to make an escape.

However, Autumn injects himself with some form of highly upgraded radiation medicine, preventing himself from dying or mutating, unbeknownst to the others. After fighting their way through Enclave soldiers in Taft Tunnel, the Lone Wanderer and the scientists eventually reach the Citadel and were, thanks to Doctor Li's frantic approach, granted sanctuary inside.

The Brotherhood of Steel were briefed on the situation, and Elder Owyn Lyons contemplated in what way to approach the situation.

Afterwards, the Enclave reinforced and fortified the memorial, setting up photonic resonance barriers all around the complex, with artillery gun and mortar launcher defensive emplacements placed near it.

The Capture of Project Purity appears only in Fallout 3.

Retrieved from "https://fallout.fandom.com/wiki/Capture_of_Project_Purity?oldid=2894849"
Community content is available under CC-BY-SA unless otherwise noted.