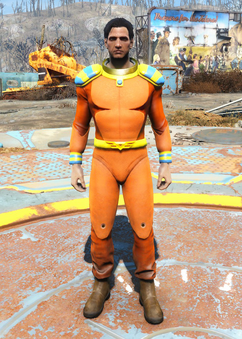 The Captain Cosmos space suit is a piece of clothing in the Fallout 4 Creation Club content "Captain Cosmos."

The Captain Cosmos space suit was a piece of equipment brought in by the USSA to the Captain Cosmos TV show, along with the Cosmic cannon and CC-00 power armor, to cope with the recent accident at ArcJet Systems.[1]

The space suit is the main character's, Captain Cosmos, signature armor. The suit itself features what appears to be an orange and yellow armored suit, made of some sort of latex or plastic material. The neck has a large, gold collar with a blue gem or dot on the neck. On the shoulders lay thick blue and yellow shoulder pads. The rest of the body consists of a Captain Cosmos belt and belt buckle, blue and yellow cuffs and large brown boots. The moon boots allow its user to jump higher with no side effects.

The Captain Cosmos space suit can be modified with ballistic weave at an armor workbench.

In the storage room on the Production Offices

Retrieved from "https://fallout.fandom.com/wiki/Captain_Cosmos_space_suit?oldid=3278880"
Community content is available under CC-BY-SA unless otherwise noted.