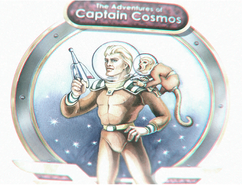 Captain Cosmos is the 1st in command in the The Adventures of Captain Cosmos. He travels space with his trusty sidekick, Jangles the Moon Monkey. In 2071, he fought the Silver Shroud in a Thanksgiving crossover episode.

Cosmos & Jangles - ruined house near Wattz Consumer Electronics
Add an image to this gallery
Retrieved from "https://fallout.fandom.com/wiki/Captain_Cosmos?oldid=3055298"
Community content is available under CC-BY-SA unless otherwise noted.