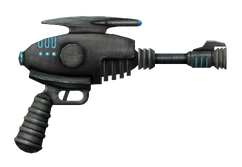 The Captain's Sidearm is a weapon which is added to Fallout 3 in the Mothership Zeta add-on. It is a unique, cleaner and shinier alien blaster used by the alien captain.

Unlike the alien blaster, the Captain's Sidearm uses alien power modules instead of alien power cells. It has a silver finish to it, unlike the rusted alien blaster that can be found in the Capital Wasteland, and actually shoots out a spread of energy like a shotgun. Shooting the sidearm into the air will show the spread of the energy. Each time it is fired, it uses 3 rounds and sends 6 energy projectiles. Although it looks like a pristine alien blaster, it can only be repaired by alien atomizers, alien epoxy, or vendors.

The Captain's Sidearm can fire a total of about 714 times, the equivalent of 24 reloads, from full condition before breaking.

The Captain's Sidearm can be obtained after defeating the alien captain on the bridge of Mothership Zeta.

This weapon does not receive a bonus from the Xenotech Expert perk. This may have been intentional because of its unique effects. [verified]