Cappy in a Haystack 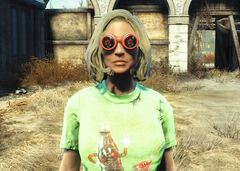 Cappy glasses are a piece of eyewear in the Fallout 4 add-on Nuka-World.

These glasses were created by the Nuka-Cola Corporation for the Cappy challenge; in this challenge the participants were to find 10 Cappy images that were hidden around Nuka-World. Winners would get to meet John-Caleb Bradberton in his office.

They are red and shaped like bottle caps, and have Cappys on the frame. They are similar to the fashionable glasses. They provide no resistances of any kind, but they are simply used for spotting the hidden Cappys around Nuka-World during the quest Cappy in a Haystack.

Occasionally, an audio message plays throughout the park which mentions that the Cappy glasses may be purchased from any souvenir stand. This would indicate that they would've been extremely common and easy to find before the Great War. Despite this none can be found throughout the park anymore by the time the Sole Survivor passes through Nuka-World.

Retrieved from "https://fallout.fandom.com/wiki/Cappy_glasses?oldid=3135105"
Community content is available under CC-BY-SA unless otherwise noted.