Super mutants (outside)
Radroaches (inside)

The Capitol Post building is a small office complex in the Capital Wasteland.

Located in L'Enfant, the building was the office of a pre-War newspaper of the same name. Various terminals in the building contain the pre-War articles of the newspaper.

Outside the office building is a medium-sized plaza inhabited by super mutants. With the Broken Steel add-on, super mutant overlords may spawn here.

The interior contains a reception area, a back room with terminals containing stories published in the pre-War periodical, and a printing room in the basement. The first terminal on the right is rigged and the reception terminal is linked to a difficult to see safe, situated in the left panel of the receptionist desk.

A locked door can be easily circumvented by passing through a substantial hole in the wall. Several radroaches can be found within the office area. In the printing room, the body of Gibson can be found, along with a brief note and the key to his house in Minefield.

Exiting from the Capitol Post back into the plaza may spawn a group of Talon Company mercs near the irradiated metro entrance. 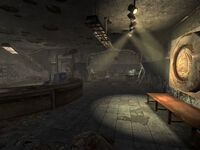 Logo above the entry