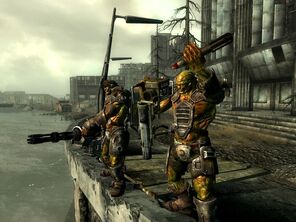 Following the Great War, the inhabitants of the Capital Wasteland as well as the organizations in the region, and the Vault 87 super mutants fought in a number of conflicts from 2078 to the present day. The Capital Wasteland Brotherhood of Steel have fought the super mutants since 2255 onwards. By 2277, the other factions fighting the super mutants are Talon Company, who lead a full on war with them, Reilly's Rangers, a mercenary group who are contracted with sweeping them from the ruins, the Brotherhood Outcasts from 2276, and finally the native raider gangs, settlements, and citizens.

Vault 87's project was to partake in the Evolutionary Experimentation Program, subjecting inhabitants to the Forced Evolutionary Virus. These particular experiments resulted in their mental faculties diminishing. They were generally less intelligent and more aggressive than their West Coast counterparts. More unlike their distant cousins, they retained less of their humanity after transformation, and no distinguishing features from their former lives could be found.

Despite their apparent lack of intelligence, the mutants were somehow able to organize themselves into a coordinated army (as evident from numerous raids). They had also procured large amounts of advanced weapons, ammunition and equipment, and maintained the FEV infrastructure necessary to transform humans to increase their numbers. In 2078, the super mutants set out to capture human captives in order to expand their army, as well as find a new source of FEV.

The super mutants terrorized the denizens of the Capital Wasteland for the next two centuries, and were widespread and rampant throughout the entirety of the wilderness. When the Brotherhood arrived in 2255, they fought a long crusade against them, and managed to almost entirely restrict them to the ruins of Washington, D.C.. The Brotherhood have endlessly fought them since then, setting the front line around the borders of D.C.

By 2277, the super mutants' territory comprised the near entirety of the D.C. ruins, and the mountains and hills within the mid-western and north-western areas of the wasteland. They also held a small amount of operating sites outside the confines of these regions. The only stronghold the Brotherhood held within the D.C. ruins was the southern portion of Arlington and Chevy Chase, however they held small outposts for skirmishes and patrol squads within Falls Church, the Mall, and Pennsylvania Avenue, although these three districts were nowhere near cleared out or secured. Talon Company became engaged in several large sieges between them and the super mutants within the Mall, Seward Square, and Takoma Park, after they were recently drove out of Takoma by the mutants. The Brotherhood Outcasts were also locked in a siege between the mutants within the Bailey's Crossroads district.

In Chevy Chase, the mutants are undertaking an on/off siege with the Brotherhood, attempting to take over the district in skirmishes with the intent of putting an end to the Brotherhood's Galaxy News Radio garrison. During one attack, a behemoth was sent, and Initiate Reddin and Paladin Jennings were killed. In Falls Church, the mutants are also in an on/off battle with them, with the Brotherhood previously taking the area and presuming it to be permanently clear, using the region for training exercises. However, the mutants attacked the area by surprise once again, taking one of Paladin Hoss' soldiers, Initiate Pek, hostage, and killing one of his soldiers. Two Brotherhood soldiers were also killed at an unknown point inside of an office building. Whether this act was committed by super mutants in unknown. In the Mall, the super mutants are in offensives by wasteland groups from all directions. They entirely own the Museum of Technology, the National Archives, and the Capitol Hill trench network. The mutants repeatedly send fireteams to ransack the Lincoln Memorial, currently held by slavers. The ghouls of Underworld have a silent peace with the mutants, due to the FEV conversion not working on their kind. Talon Company are engaged in a large-scale battle with the mutants in an attempt to occupy the Capitol building, with the mutants placing a behemoth into the building for defense, and the Brotherhood occasionally launch attacks on the trenches and the Museum of Technology.[1] The Brotherhood hold the Washington Monument and the roads encircling it, and have a small tactical shack stocked with medical supplies and ammunition. There are two teams running the outpost, with the second division being led by Paladin Berrings. Three Brotherhood soldiers are known to have been killed whilst fighting in the trenches.

In Pennsylvania Avenue's White House Plaza, the Brotherhood hold a similar outpost to the one at the Mall, complete with another tactical shack, checkpoint barriers, and an old abandoned hotel building. In addition, Talon Company are known to have sent mercenaries to the district to set explosives and thin out the mutants' numbers. In Seward Square, Talon Company are in a large-scale siege that is part of their plans to occupy the Capitol building, using artillery in their efforts. Bailey's Crossroads, owned by the Brotherhood Outcasts, has been known to be attacked by large teams of super mutants. Finally, in Takoma Park, the mutants once took the district from the residing Talon Company, and they are now defending against a reclamation effort. Talon Company have employed the use of artillery and robotic backup. The mutants have also placed a behemoth into the area to bolster their defenses.

In 2277, the Lone Wanderer raided their headquarters at Vault 87, and dealt decisive blows to their military strength and organization, with the Enclave also discovering and raiding the base afterwards. The Lone Wanderer could have informed Elder Owyn Lyons of Vault 87, with him setting out plans to eradicate the super mutants once and for all by attacking the Vault. The mutants have also never been able to conquer the Lamplight Caverns, with the residents locking them out of the main settlement, with only the Murder Pass caverns being accessible to the mutants. The mutants previously launched occasional attacks on the gate to Murder Pass, but never breached the gates, and have since gave up on the idea.

Reilly's Rangers, a mercenary company based in Seward Square, regularly comb the ruins of D.C. and thin out the mutants' numbers. An unknown contractor, named Smith, pays the Rangers for these efforts. The Rangers became involved in a lengthy battle with the mutants in the Vernon Square district, resulting in the Rangers making a final stand on the roof of the Statesman Hotel. The mutants are also attempting to scour the old Vault-Tec headquarters for information and any possible leads on a new source of the Forced Evolutionary Virus to replenish their dangerously decreasing stocks. However, the robot security has so far stopped them from making it past the reception area.

Captives are mostly taken from the countryside and wilderness, although scavengers and travellers in the Washington, D.C. ruins are often detained as well. The settlement of Big Town is often attempted to be ransacked by the mutants, with residents being taken to the nearby Germantown police HQ for temporary containment before they are sent to Vault 87. All other known captive sites are the clifftop shacks, Mason Dixon Salvage, Roosevelt Academy, the Mason District, the super mutant bonfire outside of Rivet City, the Anchorage Memorial riverside, Germantown, the Hallowed Moors Cemetery, the Farragut district, the surrounding countryside of Vault 87, and Calverton. Calverton is often used as an ambush point by the mutants, and is currently under surveillance by mercenary organizations. A behemoth is used to assist and defend in any way possible. The Farragut district is often ventured into by super mutants seeking human captives, with Megaton occasionally assaulted by the mutants, and captives being held at sites in Farragut West.

After the conclusion of Broken Steel, the super mutants are extremely fractured, and have almost been driven extinct. They are running out of FEV, and have lost their headquarters and breeding ground of Vault 87. The Brotherhood of Steel has began further closing in on D.C., backing them into a corner. In 2282, a super mutant named Shephard who led efforts to reorganize the mutants was killed by Arthur Maxson.

The Capital Wasteland super mutant conflict appears in Fallout 3 and its add-on Broken Steel, and is mentioned in Fallout 4.

Retrieved from "https://fallout.fandom.com/wiki/Capital_Wasteland_super_mutant_conflict?oldid=2672879"
Community content is available under CC-BY-SA unless otherwise noted.