The cap counterfeiting shack is a location in the Mojave Wasteland in 2281. It is west of the Bitter Springs recreation area, over the road and railroad tracks.

This shack was used to produce counterfeit bottle caps. When the Courier arrives in 2281, the shack is abandoned, with only a small handful of bottle caps remaining. The inhabitants of the shack are never seen, alive or dead.

The shack's entrance to the underground counterfeiting facility is actually on the wrong side of the room, likely due to a placement error when making the game. It would have been much more logical to make the staircase into the counterfeiting facility into the cliff next to it. Instead, it is on the side of the shack with flat ground, and outside, the outline of a descending staircase is not visible.

The cap counterfeiting shack appears only in Fallout: New Vegas. 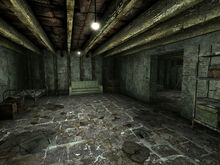