Fallout: New Vegas
“The coordinates you received lead you to this canyon filled with storm-tossed wreckage. Beyond lies the Divide.”— Lonesome Road

The canyon wreckage is a location in the Mojave Wasteland in 2281. It is located west of Primm. It can be found by following a path north by northwest from the California Sunset Drive-in.

There appears to be a passage through the mountains leading to the Mesquite Wilderness Area, however, it is blocked by the wreckage of several burned-out cars, trucks and other objects. One of these contains several charred skeletons and some explosive crates.

Several of these objects sport graffiti, reading "You Can Go Home, Courier," "the Divide," "Lonesome Road," backwards "6"s and "Courier Six?" After hints dropped in Dead Money, it seems likely that the author of this graffiti is Ulysses.

After downloading Lonesome Road, the wreckage will be removed and the path will open for the add-on. The player character enters through the wreckage of a bus. Upon completing the main questline, a footlocker will appear outside of the canyon wreckage and will contain unique items. If Ulysses is spared in The End, he will be just beyond the entrance of the wreckage, sitting on a cliff overlooking the ruins of Hopeville.

The canyon wreckage appears in Fallout: New Vegas and the add-on Lonesome Road.

The canyon wreckage is located in the same geographical area as the real world State Line Pass, between Devil Peak and Clark Mountain in San Bernardino County, California.

Skeletal remains of a member of the dead family

Overturned truck in the wreckage

An overhead view of the whole wreckage 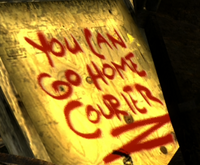 "You can go home Courier" graffiti