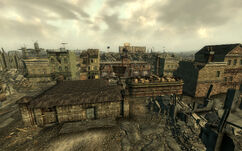 Canterbury Commons is a trading post and a small town located on the eastern edge of the Capital Wasteland, which in the year 2277, is currently suffering from a full-blown battle between two "super humans." It is inhabited by five wastelanders and can be found north of Washington, D.C., north of Vault 108 and southeast of the Temple of the Union.

Canterbury Commons was initially founded by Uncle Roe and his sister Daisy in 2258 as a trading center for caravan merchants in the Capital Wasteland.[1] Though raider attacks in 2271 and 2274 killed Daisy and her husband Louis.[2]

A few months before August 17, 2277, Tanya Christoff would sink completely into madness and dawning "the AntAgonizer" persona to destroy Canterbury Commons. Believing it to be a blight on the wasteland.[3] Once the AntAgonizer destroyed Scott Wollinski's favorite robot he created and dawned "the Mechanist" persona to protect the town.[4] The settlement is built into what appears to be the remains of a small pre-War town, with the current inhabitants only using a small part of the buildings available. The town's only permanent merchant, Joe Porter, lives in an old Dot's Diner.

Adjacent to this building is an old garage which is home to Dominic and Machete, and across the street is the old fire station, now Uncle Roe's house which Roe shares with his nephew Derek Pacion. Behind the old garage, a small brahmin stable can be found. In front of the town to the west is a large circular cul-de-sac where caravan merchants appear regularly.

Canterbury Commons appears only in Fallout 3.

Canterbury Commons was originally intended to have an open-air bazaar in the circular cul-de-sac, populated by various traders. Entries exist for two such NPCs, named "Caravan Trader" in the editor, but remain unused and without any vendor containers.

Near the merchant stop, looking east toward the main street

Retrieved from "https://fallout.fandom.com/wiki/Canterbury_Commons?oldid=3488556"
Community content is available under CC-BY-SA unless otherwise noted.