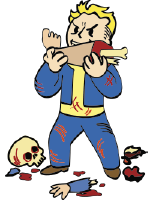 Cannibalism is the practice of eating members of one's own species as food. Cannibals appear in every Fallout game in some form with the exception of Fallout: Brotherhood of Steel, and appears as a perk in Fallout 3, Fallout: New Vegas, Fallout 4 and Fallout 76.

Cannibalism is considered a crime against nature in most major Wasteland societies. Conversations with members of the Family in Fallout 3 indicate that cannibals are ostracized and often beaten by other members of society, although by implication this suggests that cannibalism alone (when not also combined with murder) is not considered a sufficient crime to warrant execution/extermination. Vance, the leader of The Family, implies that cannibals are a species mutation like ghouls or psykers; they are born with an innate craving for human flesh, as well as the ability to consume it without ill effects (as Old Ben in Freeside remarks that eating human flesh causes debilitating shakes in normal humans, which can eventually lead to death).

Cannibals often form groups in order to obtain mutual social acceptance while engaging in this taboo activity. Some, like the residents of Andale in the Capital Wasteland or the underground-dwelling tribe that would eventually become the White Glove Society in the Mojave Wasteland, are descended from a long line of individuals who have practiced the killing and consumption of fellow humans. Other groups, like The Family, consist of individuals who have banded together after being shunned or exiled from their home communities for their practice of cannibalism.

Normal wastelanders may unwittingly engage in cannibalism, as some vendors sell human flesh under the guise of regular meat, either because they are practicing cannibals themselves, or because they can obtain human flesh cheaply and engage in unethical business practices by selling it as food. Iguana Bob, a highly successful food vendor in The Hub, would obtain human flesh for cheap from the local morgue, and sell it at a premium price as "iguana bits." Certain groups of hunters in the Capital Wasteland hunt wastelanders for their meat, and then sell it to unsuspecting travelers. Old Ben in Freeside remarks that his father's butcher shop went out of business after a local merchant began selling "strange meat" at very low cost; after the merchant died from the debilitating shakes associated with prolonged consumption of human flesh, human remains were found buried under his house.

It appears that those who practice cannibalism in Appalachia have a tendency to turn into wendigos: creatures that are tall and slender, though are generally slouching or crouched down, have large hands with long, skinny, claw-like fingers, and still desire human flesh. Notably, the head of a cannibal raider gang, Morris Stevens of the Gourmands, became the "progenitor wendigo" and is believed to be the ancestor of most of the region's wendigos. Other cannibals who became wendigos include Nia, a former camp counselor of the Pioneer Scouts who led campers away to be eaten; Scott Conroy, who was trapped in a sunken church with a park ranger and another cannibal; and Earle Williams, who was trapped in the Monongah mine with no food. It is unknown why cannibals who turn into wendigos are only seen in Appalachia.

The "debilitating shakes" caused when a human eats human flesh is a reference to the real life disease known as kuru, which is transmitted through cannibalism.

Retrieved from "https://fallout.fandom.com/wiki/Cannibalism?oldid=3301864"
Community content is available under CC-BY-SA unless otherwise noted.