Cannibal Johnson's cave is a location situated southeast of the Strip, southwest of Vault 34, and northwest of Camp Golf in the Mojave Wasteland in 2281.

There is a hollowed-out rock slightly to the right of the entrance of the cave. Directly inside, Cannibal Johnson is standing in front of a campfire. There is also a bear trap on the ground directly in front of the entryway. Inside his living area is an Enclave footlocker and an unowned bed.

Past the living area, a path leads down into another room, containing the corpses of coyotes, night stalkers, and mole rats. There are also a few pools of "blood" in this same room, which counts as stealing if the Courier drinks from it. Although it appears to be blood, the game treats it as radiation-free water.

Two dead coyotes in the room with the pool of "blood" may re-spawn alive with zero health. [verified] 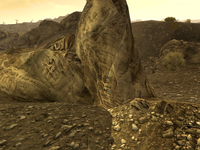 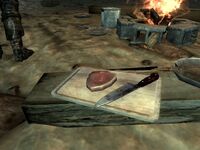 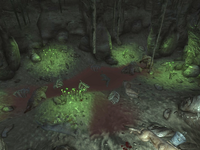 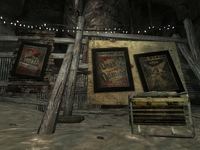 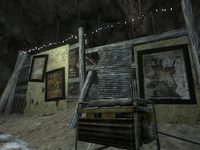 More decor in the cave 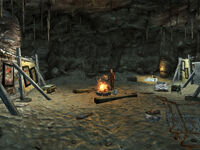