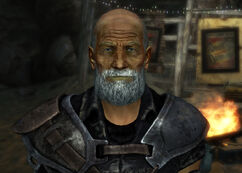 “We all gotta go sometime, but I was hoping for something a little more... heroic.”

Cannibal Johnson is a former Enclave soldier and accomplished hunter,[1][2] living in his cave in the Mojave Wasteland in 2281.

Johnson was a soldier in the Enclave, serving as the squad marksman[3] in Captain Judah Kreger's squad at Navarro with Orion Moreno, Doctor Henry, Daisy Whitman, and Mark Gannon; he was known to often be in conflict with fellow squad-mate Orion over "philosophical" differences.[4][5] Johnson hated the Enclave and everything they did; he often tried to subvert orders and "serve without serving."[6] In contrast with Moreno, Johnson actually agrees with a lot of the NCR's goals and believes them to be the Mojave's best hope for a stable and free future.

Sometime after the destruction of Control station Enclave, the NCR sacked Navarro and he, the squad, Arcade Gannon's mother, and a young Arcade Gannon fled south into the NCR. They continued to flee east as Enclave personnel trying to integrate into the NCR were being found. He and the squad eventually settled in the Mojave Wasteland and went their separate ways. Johnson eventually settled down with a tribal girl he had met, but never had any children before she passed away.[7] Now he sits alone in his cave, waiting for death to take him for the sins he'd committed while with the Enclave. He also reminisces about his former commander, Arch Dornan, saying "he was the meanest bastard [he] ever knew."[8]

When asked about his nickname, he explains to the Courier that one day when he was surrounded by raiders and, out of options, he did the first thing that occurred to him: bite into the heart of one the raiders he had already taken down. This shock tactic caused some of the others to flee, and bought him the time he needed to kill the rest - and ever since the name has stuck, his improvisation growing into mystique.[9][10]

Low Intelligence characters (3 or below) can ask Johnson about "this Reaper guy."[11] The Courier misses the fact that he's talking about death in the abstract as opposed to a human being.

* Second Battle of Hoover Dam only

Cannibal's word for the Remnants bunker is "old," which he finds appropriate.

If one continues to talk to him about the Enclave, he will have a dialogue option about a drill sergeant who once caught a soldier without his uniform.[12] This is a reference to Fallout 2 when the Chosen One travels to Navarro and talks to the drill sergeant there without wearing advanced power armor, Dornan will yell at him for being out of uniform.

Retrieved from "https://fallout.fandom.com/wiki/Cannibal_Johnson?oldid=3381523"
Community content is available under CC-BY-SA unless otherwise noted.