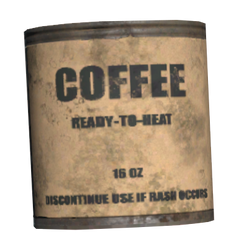 Canned coffee is a consumable item in Fallout 76.

A metal can filled with ready-to-heat instant coffee. It is quickly brewed by adding hot water or milk to the preserved powder. According to the label, it produces 16 fluid ounces of coffee and may cause a rash.

Retrieved from "https://fallout.fandom.com/wiki/Canned_coffee?oldid=3483949"
Community content is available under CC-BY-SA unless otherwise noted.