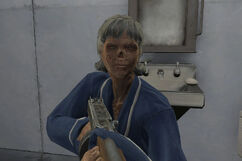 As a child, Isola grew up in a "tough" neighborhood and dreamed of being a hero like the Silver Shroud, later joining the Boston Police Department (and graduating at the top of her training class) to try and fulfill that dream. As a young and inexperienced but spirited officer, she was chosen by her superiors Lieutenant Mitchell and Sergeant Callahan to get close to Louie Trevisani and expose his operations from within, in the guise of a struggling actress named Candy.[1][2] Isola played along with everything thinking the police would pull her out when everything was over, manipulating Trevisani to fall in love with her and expose some of his gang's crimes in the process. She was brought into the vault underneath the Shroud Manor a few days before the bombs fell and Trevisani proposed to her, but she rejected and proceeded to kill him. A few days after the bombs dropped, Isola returned to Police Precinct 8 and found the shocking truth: the police didn't care about what happened to her as long as Trevisani was caught.[3]

She reacted by burning her uniform and turning her back on her life as a police officer, fully taking on her identity as "Candy," adopting Trevisani's criminal lifestyle and rebuilding his crime gang with help from surviving pre-War mobsters. Over the next two centuries, she became a successful Triggermen mob boss.[4]

Shrouded Manor: When the Sole Survivor enters the bunker in the basement of Shroud Manor, Candy can be found in the bathroom and, as soon as the door is opened, will attack on sight. She must be killed in order to claim Shroud Manor.

Officer Isola's situation references a scenario presented in the episode "Fat Fahy's Folly" of The Silver Shroud, as heard on Silver Shroud Radio. During this episode, the Mistress of Mystery disguises as a girl named Candy in order to gain access to a mobster's lair via pretending to romance one of his subordinates. Officer Isola resorts to the same strategy in order to infiltrate Louie Trevisani's operations.

Retrieved from "https://fallout.fandom.com/wiki/Candy?oldid=3432351"
Community content is available under CC-BY-SA unless otherwise noted.