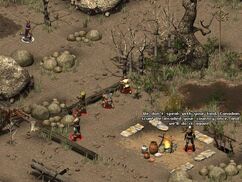 Deal with the tribals

“The attack could start at any minute!”

Canadian Invasion is a special encounter in Fallout Tactics.

In this encounter, the player character will find a group of tribals protecting the border between the United States of America and Canada. Upon coming within a certain distance of the group (even if sneaking undetected), the leader beside the campfire yells, "We don't speak with your kind, Canadian scum! We invaded your country once, and we'll do it again!"[1]

At this moment, the tribals become hostile will then attack the player character with an assortment of small guns and melee weapons. The tribal furthest to the northeast carries the unique water gun along with approximately seventy canisters of acid.

The Canadian Invasion special encounter appears only in Fallout Tactics.

Retrieved from "https://fallout.fandom.com/wiki/Canadian_Invasion?oldid=3396420"
Community content is available under CC-BY-SA unless otherwise noted.