Can You Find it in Your Heart? 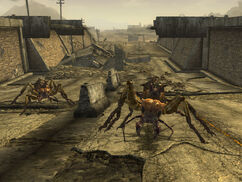 The ants, attacking at the underpass

“I need to get the caravans moving again, that means clearing a path north. There's too much crawling the asphalt up the road to allow it.”— Ranger Jackson

Can You Find it in Your Heart? is a side quest in Fallout: New Vegas.

Speak with Ranger Jackson at the Mojave Outpost. Ask him if he needs help, Jackson will tell the Courier that an insect infestation is preventing safe passage for the supply caravans. Jackson offers to "lose" some supplies to pay with if it is decided to help him.

Clear out the Critters on the Road by Ivanpah Dry Lake

The "critters" that are causing the problem are seven giant ants, which have been gathering at the remains of the 95 underpass, just east of the Nipton Road reststop.

Return to Ranger Jackson at the Mojave Outpost

Once conversation has been enacted with Ranger Jackson, he will thank the Courier for services rendered. When asked about the reward, Ranger Jackson expresses that he can hand over a few weapons that "nobody would miss". The Courier will then receive 100 XP and NCR fame. If they inquire about their "reward" after completion of the quest, Jackson will say that he never said anything about a reward; merely misplaced supplies. Jackson will then hand over 100 caps, two caravan lunches, a service rifle (at 65% condition), 72 armor piercing 5.56mm rounds, and two weapon repair kits. If the Courier doesn't ask about the reward, they will not receive the previously listed items.

The ants will not spawn until the quest has been initiated.

"Can You Find It in Your Heart?" is a popular song with music by Robert Allen, lyrics by Al Stillman, and performed by Tony Bennet, published in 1956.

Retrieved from "https://fallout.fandom.com/wiki/Can_You_Find_it_in_Your_Heart%3F?oldid=3144307"
Community content is available under CC-BY-SA unless otherwise noted.