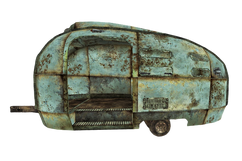 Campers are smaller travel trailers used as mobile homes before the Great War.

Many campers can be found dotted around the Capital and Mojave Wastelands. They commonly contain loot, such as suitcases with clothing, food, and a mattress. Some are the remains of active campers that have been attacked and looted and some are used as barricades or used to fortify structures. Others are seen towed behind cars.

There are 50 campers total, including one in the Divide, nine in Zion Canyon, and 40 in the Mojave Wasteland.

At the Bitter Springs recreation area

In the Bitter Springs refugee camp

Near the Boulder Beach campground

Another one at Boulder Beach campground

Add a photo to this gallery
Retrieved from "https://fallout.fandom.com/wiki/Camper?oldid=3376404"
Community content is available under CC-BY-SA unless otherwise noted.