The Campanas del Sol is a location in the Sierra Madre in 2281.

Before the Great War, the area consisted of a church, morgue, and the homes of casino staff.

Campanas del Sol is situated in the northernmost area of Salida del Sol, contiguous with the Salida del Sol north area. The entry point for the area is a large courtyard surrounded by balconies. Five ghost people will be lurking in the buildings and balconies surrounding the courtyard.

The large courtyard leads to three holes in the wall on the upper balcony level - north, east, and west. The north one represents the way forward but first one must reach the balcony. Meanwhile, on the lower courtyard level, there are two holes in the wall, east, and west, in addition to the stairs returning to the south. Since the east hole leads to a dead end room (though with some minor loot), one must proceed through the hole in the western wall.

Heading through the western hole takes one through a chapel room and then downstairs through a large but mostly empty wine cellar, and then back upstairs. At the top of the stairs, one will reach the eastern side of the courtyard balcony. Two ghost harvesters will by now have spawned in the courtyard.

From the balcony, one can then stop by the upper western hole in the wall which leads to a dead end room, containing ammo for the holorifle. Proceeding through the northern hole in the balcony to reach the final section of the level results in finding an empty dormitory, another hole in the wall, and a small courtyard. As one approaches the archway on the other side, one's collar will begin beeping. The source is a radio in the upper room, which can be turned off or destroyed with thrown explosives.

Crossing the courtyard's upper balcony, one will reach a hole on the other side leading to a passageway and a room. In the passageway, a currently inactive speaker can be found. The ladder at the end of the final room leads to the top of the bell tower, where the control panel for the Trigger the Gala Event quest can be found along with the two vending machine codes.

Once the gala event begins, additional ghost people will spawn throughout the area and can be attacked from the tower. In addition, any previously inactive speakers will turn on.

Campanas del Sol roughly translates to "bells of the sun" in Spanish. 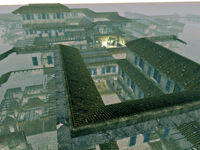 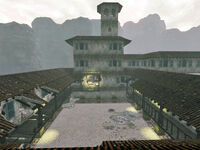