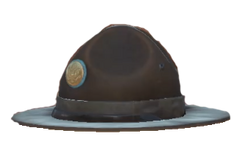 The campaign hat is a hat in Fallout 76.

The campaign hat is a broad-brimmed piece of headgear similar in appearance to the ranger outfit's hat. The seal of the United States is displayed on the front of the hat in a light-blue rim. A gray-brown strip of leather is apparent where the brim of the hat meets the rest of the hat.

This hat is referred to as the "drill sergeant hat" in the game's files. This style of hat is commonly referred to as a campaign hat or campaign cover and is used by various military and police forces, including the drill instructors of various branches of the United States military.

Retrieved from "https://fallout.fandom.com/wiki/Campaign_hat?oldid=3507131"
Community content is available under CC-BY-SA unless otherwise noted.