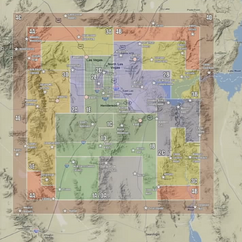 Camp Willow (also known as Willow Beach) is a location southeast of the Fort.

It is known that there was an NCR military camp located at Willow Beach. However, sometime after the First Battle of Hoover Dam the Battle of Willow Beach took place. As a result, the camp was destroyed. This later led to NCR being pushed off of the east side of the Colorado River.[1] The location appeared on an early map of Fallout: New Vegas.[2]

Camp Willow is located in the same geographical area as the real world Willow Beach in Mohave County, Arizona.

Retrieved from "https://fallout.fandom.com/wiki/Camp_Willow?oldid=3179344"
Community content is available under CC-BY-SA unless otherwise noted.