(#px, how far down the music player is on the page from other things, example: 108px)embed/videoseries?list=PLzOZOmIFGrDTR-RK9e66ME3LAv3oIPQQY&hl=en_US0 "City of the Dead"
“Welcome to Camp Searchlight, the shittiest place on Earth.”— Private Edwards

Camp Searchlight is an irradiated NCR military camp located in the ruins of the town of Searchlight, in the southeastern Mojave Wasteland.

As an unfortunate twist of fate would have it, a convoy of flatbed trucks transporting nuclear waste from San Onofre was passing through Searchlight when the Great War broke out. Local police directed the drivers to temporarily park their vehicles in the town's fire station, but no one ever came back to retrieve them. There they sat in their extremely sturdy solid steel spent fuel flasks for over 200 years. The New California Republic recently set up a sizable base here; this was a major obstacle for Caesar's Legion due to its size and clear view of the surrounding desert. When it became obvious that a direct assault would not prove fruitful, Vulpes Inculta sent in some spies to learn more about the situation. After he learned about the radioactive waste being stored in the fire station, he ordered some unwitting legionaries to open the containers. Though the legionaries died almost instantly, the sacrifice produced a massive wave of death and ghoulification among NCR troops that effectively destroyed Camp Searchlight as a viable military base.[1]

The area is now highly radioactive and infested with Feral Ghouls. This action also resulted in the city having a green cloud hanging over it, which is most prominent during the night.

Camp Searchlight has several buildings which can be entered, all of which are radioactive as well as the town itself. The buildings which can be entered include: a schoolhouse with a few golden geckos, a house containing the non-hostile ghoul Private Edwards, and a church in the west containing Logan and his prospector companions who are looting the town for the Crimson Caravan Company. Upon entering Searchlight fire station (where the radioactive canisters were originally opened, causing the town's demise), the Courier will immediately encounter a radscorpion queen and several normal radscorpions. To enter the firehouse, one needs to either kill or join Logan, as he holds the keys. There are several terminals outside that control the turret defense system.

The devastating radiation attack by the Legion on Camp Searchlight has pushed the surviving NCR soldiers back to minimum safe distance. The fury and emotion is still raw, as First Sergeant Astor leads his men on patrol, and witnesses what his brothers in arms have turned into. In the modest camp lies First Sergeant Astor's log; it reads as if the man blames himself, and is ready to drop.[1] 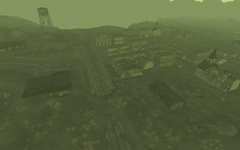 Aerial view
Add an image to this gallery

Retrieved from "https://fallout.fandom.com/wiki/Camp_Searchlight?oldid=2210805"
Community content is available under CC-BY-SA unless otherwise noted.