Camp Searchlight is an irradiated former NCR military camp, located at the convergence of Nevada 164 and Highway 95 in the Mojave Wasteland.

During the Great War, the bombs forced the Searchlight police department to divert a convoy carrying nuclear waste from San Onofre into Searchlight, so that the waste could be safely stored. The trucks could be parked at the fire station without exposing them to nuclear blasts that would turn the sealed, secure fuel casks transported on the flatbeds into massive dirty bombs.[1]

The spent nuclear fuel rods remained there for over two centuries. When the New California Republic deployed in force to the Mojave, Searchlight was chosen as a site for a military base. Camp Searchlight was established, becoming a major communications and logistics hub for the NCR Army. However, this simultaneously made it a target for the Legion. Vulpes Inculta devised a plan that involved using frumentarii to intercept shipments of supplies meant for the camp, depriving the troops of necessary materials and stockpiling them for later use by the Legion.[2][3]

As the supply issues worsened, tensions emerged among the camp's senior staff,[4] and the frumentarii waited for an opening in the camp's defenses. The opportunity came soon, as the patrol routes were changed again for operational security reasons.[5] As usual, gaps opened in the patrol routes as the troops had to get used to the new schedule.[6]

The second initiative perpetrated by Vulpes was the one that caused the camp's destruction. He sent in a small group of legionaries, ordering them to infiltrate the fire station and unseal the nuclear fuel casks, unleashing lethal levels of radiation on the camp. The legionaries were killed instantly alongside some NCR personnel. The rest of the NCR soldiers turned into ghouls or died soon thereafter of radiation sickness.[7][8] Only a handful of troops out on patrol survived, rallying under First Sergeant Astor.[9] In the meantime, a task force under centurion Aurelius of Phoenix landed at Cottonwood Cove, establishing a beachhead on the western side of the Colorado River and immediately launching raids on both the surviving NCR troops and especially supply and trade caravans heading up to New Vegas. Further legionary groups moved up north and west as time went by, targeting Nelson and Nipton to lay the groundwork for the Second Battle of Hoover Dam.[10]

Searchlight surrounds Highway 95 on a north-south axis, and is mostly intact considering the two centuries of neglect and the recent radioactive devastation unleashed by Caesar's Legion. The sole remaining NCR camp is located on the outskirts of the town to the northeast, staffed by what remains of the Searchlight garrison. Other signs of life are located in the basement of the ruined church in the western part of town, where Logan and a few other prospectors are busy preparing to loot the town on a contract from the Crimson Caravan Company. The terrified Private Edwards is hiding in a Searchlight home near the church.

The streets of the town and much of the surrounding environs are prowling with ghoulified NCR troopers. They include regular ferals, glowing ones, and a few who managed to retain their motor skills who move and attack like normal humans but only with combat knives. They are most common in the center and to the northeast, where the Camp's command was located (at the former Searchlight police station) and the trucks used to set up the base were parked. The Searchlight fire station (Searchlight Fire & Rescue Station No. 1) is in the heart of town and contains the pre-War transport of spent fuel rods that were used to turn the entire area into an irradiated hellhole. The station is locked, with keys carried by Logan. Entering it will prompt a swift response from the radscorpion queen and several radscorpions that set up a nest there. To the south is the Searchlight Elementary School with another ruined church. The school is "attended" by several golden geckos, who enjoy the warmth of the town's radiation. Further out is the trailer park that served the inhabitants of the town.

The NCR set up a network of defensive turrets to protect the perimeter, with terminals placed in cover nearby. The turrets are found near the police station, behind the fire station and on the intersection just south of it, and under the Cottonwood Cove Road bridge passing over Highway 95.

Camp Searchlight has several buildings that can be entered, all of which are radioactive alongside the town. The buildings which can be entered include a schoolhouse with a few golden geckos, a house containing the non-hostile ghoul Private Edwards, and a church on the western end of town, containing Logan and his prospector companions who are looting the town for the Crimson Caravan Company. Upon entering the fire station, where the radioactive canisters were originally stored and opened, the Courier will immediately encounter a radscorpion queen and several normal radscorpions. To enter the firehouse, Logan needs to be joined or killed, as he holds the key. There are several terminals outside that control the turret defense system.

The devastating radiation attack by the Legion on Camp Searchlight has pushed the surviving NCR soldiers back to a minimum safe distance. The fury and emotion are still raw, as First Sergeant Astor leads his men on patrol and witnesses what his brothers-in-arms have turned into. In the modest camp, First Sergeant Astor's log can be found, revealing that he blames himself for the incident.[7]

Crusin the streets of Searchlight

Water tower on the north side

Military trucks on the main drag

Pointing the way to Searchlight 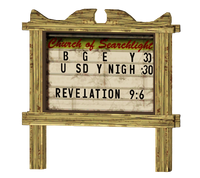