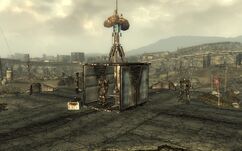 “You have been chosen by our great President to participate in this Camp RHO experiment. We have strategically deployed you to test out our newest technology, the R76-H3-0 chip (herein referred to as the RHO Chip).”— Enclave field research terminal entry

Camp RHO is a small Enclave camp in the east of the Capital Wasteland near Canterbury Commons, northwest of Vault 108 and southwest of the robot repair center. It is an unmarked location, and like all Enclave encampments, it does not appear until after The Waters of Life.

Camp RHO is part of an Enclave isolation program, inhabited solely by one Enclave officer and four automated turrets, and possibly an Enclave soldier with power armor. The officer carries an experimental Rho ID, which renders the turrets friendly to the Enclave or the player character and their companions. With Broken Steel installed, there may be an Enclave Hellfire trooper armed with a heavy incinerator.

The camp is located in the middle of a crossroads, and consists of a container with a terminal, inside of which information about the experiment can be found. The latter two options the terminal offers are disabled. The four automated turrets are arranged around the container in the center.

Camp RHO can pose a substantial threat to caravan merchants walking away from Canterbury Commons. Because Camp RHO is in the same cell, the merchants may be killed without an opportunity to intervene.

Camp RHO appears only in Fallout 3.

Retrieved from "https://fallout.fandom.com/wiki/Camp_RHO?oldid=3202733"
Community content is available under CC-BY-SA unless otherwise noted.