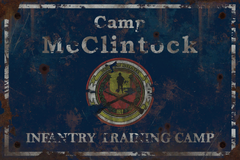 Established in 2072,[2] Camp McClintock Infantry Training Center was one of the premier training facilities in Appalachia and like nearly every other spot on the map, it did not escape the wave of automation before the Great War, where flesh and blood NCOs in charge of whipping recruits into shape were replaced with completely automated courses and robots. While the recruits hardly noticed a difference, it meant the world to the human staff, now relegated to desk jobs and oversight duties.[3] One of which, a US Army sergeant senior drill instructor by the name of O'Malley, kept a record of the attempted process of turning Mr. Gutsies into doing the job, beginning in May 2077.[4] June proved little progress, with the robot proving to be unable to climb up steep inclines or stairs, reverting to Mister Handy programming and killing a private.[5] July was worse, with a Mr. Gutsy nearly burning down a barracks building due to another private's negligence.[6] Finally, in August, 4 months after the transition began, it was declared complete, with O'Malley's service no longer required.[7]

However, the automation proved to be a benefit for post-nuclear survivors, particularly Thomas Eckhart, who used the systems to promote his soldiers, and make Ellen Santiago the general he so badly needed for his plans.[8]

In 2103, as people came back to Appalachia, Joe Creigh has recently come to Camp McClintock and enlisted as a private, still working on completing his basic training under the Master Sergeant Gutsy, but has yet to complete the agility obstacle course.[9]

Camp McClintock is a U.S. military camp populated by active Army Mister Gutsy units, including the commanding Master Sergeant Gutsy. The camp has functional automated uniform dispensers, ID scanners and a training course, as discovered by the overseer when she visited the camp. The main entrance has a guardhouse and gate. The main building sits in the center of the training grounds and has two floors and an accessible rooftop. The barracks are southeast of the main building. Occasionally, super mutants may attack Camp McClintock via the front gates.

The main building contains the camp's weapons and armor workbenches, the uniform dispenser, and an overseer's cache with another one of her tapes, detailing her adventures at the camp. Upstairs are the offices, with the Master Sergeant Gutsy (part of Back to Basic) upstairs in the southeastern office. The office also contains a locked terminal and a wall safe.

The barracks are a wooden hut to the southeast of the main building, beyond the training stations. They contain beds (safe from disease), minor loot and a uniform voucher necessary to obtain one from the dispenser. The IFV outside contains a locked loot crate. There are four training stations for the quest Back to Basic:

An ammunition vending machine is in the shack at the marksmanship firing range. A uniform dispenser is behind the counter of the main building.

Camp McClintock appears only in Fallout 76.