“Lost, huh? If you say so. If you head over to the front terminal building you should be able to get in through the garage doors in back.”

An expansive building housing a science lab, interrogation room, several supply rooms, quarters, and office space for New California Republic officers. The terminal has three entrances, all of which lead to the main lobby and are accessible from the interior of Camp McCarran. The terminal foyer contains rows of non-operating slot machines in front of the reception desk. A military aircraft hangs overhead, with escalators on either side leading to the second floor and concourse. Sometimes there will be bottle caps located around the slot machines.

To the east, Colonel Hsu can be found in his office. Nearby is the Office of Science and Industry, or OSI, a research lab with Drs. Angela Williams and Thomas Hildern. To the west is the office of Captain Curtis.

Upstairs, the player character will find Lieutenant Boyd and the detention center on the right. The monorail to the Las Vegas Boulevard Station and New Vegas Strip is to the left. The pre-War monorail is still fully functional and allows quick and safe transport between the camp and the Strip. However, only military personnel and VIPs are allowed to use it. The Courier will be allowed to use the monorail if they wear an NCR uniform, are accompanied by Boone, or have a good reputation with the NCR.

Upstairs next to the interrogation room, there is a box in the jail with an MP confiscated goods trunk that requires a Lockpick skill of 100 to open. Contained inside is Boxing Times, two doctor's bags, a copy of Locksmith's Reader, Mentats, Patriot's Cookbook, a super stimpak, and ¡La Fantoma! After completing The White Wash quest, the Courier will be given the key to the trunk as a reward. The concourse contains a mess hall and kitchen and more slot machines. One of the hallways leads to the Camp McCarran supply shack run by Seargent Contreras and an exit outside. 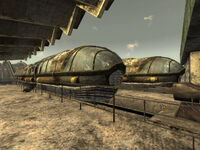 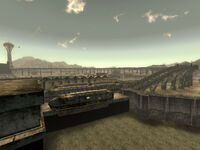 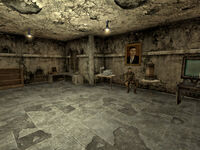 Airport bathrooms am I right

Fighter jet hanging from the ceiling

Another view of the jet
Deutsch Русский Українська 中文
Community content is available under CC-BY-SA unless otherwise noted.
Advertisement