Quests:
Classic Inspiration
For Auld Lang Syne
I Could Make You Care
I Don't Hurt Anymore
I Put a Spell on You
The White Wash
There Stands the Grass
Three-Card Bounty
You Can Depend on Me
A Final Plan for Esteban
Bounty Killer
Dealing with Contreras
Gland for Some Home Cooking
Not Worth a Hill of Corn and Beans
Poor Meat Never Makes Good Soup
Rest and Resupply
Silus Treatment

Fallout: New Vegas
“Camp McCarran is the headquarters for the NCR military in this region. It occupies the old airport next to New Vegas.”— Lt. Monroe

Camp McCarran, known before the War as McCarran International Airport,[1] is a pre-War airport which serves as the headquarters for the New California Republic Army in the Mojave Wasteland in 2281. It is considered a close second to Hoover Dam in terms of strategic importance. It is located south of the Strip North Gate and southwest from NCR sharecropper farms.

Originally founded as the Alamo Airport in 1942, the airport was renamed to its present name on December 20, 1948, after Pat McCarran, Senator, Nevada native, and author of the Civil Aeronautics Act. Once the primary airport of Las Vegas, the McCarran International Airport was heavily fortified before the Great War and featured a direct monorail connection to the Strip.

Although abandoned in the wake of the Great War, the arid climate of the Mojave preserved the buildings well, allowing for the New California Republic to settle into it following the Treaty of New Vegas in 2274. It subsequently became a hub of all NCR Army efforts, particularly the logistical aspects of troop allocation, supply distribution, and intel.[2]

Camp McCarran is the largest NCR military base in the New Vegas area and serves as the headquarters for NCR military operations in the Mojave region and as a center of logistics and information for NCR Army forces anywhere in Nevada.[3] The base is constantly under attack from the Fiends, a drug-crazed gang that operates in the area. It also has several Caesar's Legion spies within it.[4]

The former civilian airport was chosen by the NCR for a military base because of the monorail to the Strip, for being an easily defensible location, and having easily utilized technology as well as fortifications that were built before the Great War.[3] Mr. House agreed that NCR could establish a major military presence there as part of the New Vegas Treaty. McCarran includes a larger garrison than any other base in the area, except possibly Hoover Dam. Despite its high importance and large garrison, it is shorthanded due to constant skirmishes with the Fiends and troop redeployments.[5]

Camp McCarran is also beset by many issues undermining operations. Notable problems that Camp McCarran is suffering in 2281 include broken-down cooking machinery in the mess hall, a lack of anything but mixed vegetables to feed the troops, spies in the base, and the captured centurion who refuses to talk to NCR commanders.

The base commander is Colonel James Hsu, who also commands all NCR Army forces in the Mojave. General Lee Oliver, the NCR Army's leader, used to command the base personally, but he has relocated to Hoover Dam in anticipation of the coming battle with Caesar's Legion and has thus left Hsu fully in command of the garrison.[3]

The airport is mostly intact, having only suffered damage from lack of repair. The NCR has converted several of the guard posts into sniper nests, and the parking lot in the center into a barracks with sleeping, medical, supply storage, office, mess hall, and recreation tents set up, as well as firing ranges. Near the cargo terminal gates is a truck repair depot.

There are also several NCR supply trucks parked around the barracks tents and passenger airplanes near the control tower. The tents closest to the camp entrance are occupied by the NCR 1st Recon, while the rest of the tents are used by regular NCR soldiers. Some beds, such as those used by 1st Recon, may be used by the Courier without penalty.

If the Courier has enough positive reputation to use the NCR emergency radio, an NCR trooper or ranger standing outside the camp's entrance will assist the Courier. Speaking to the trooper or ranger will cause him/her to say "Trooper, ready to fight!" or "Ranger at the ready!" and they will become part of the party. If they die, a message is displayed on the screen, informing the player character of such.

The outside of the base is usually patrolled by groups of three NCR troopers on all sides of the complex, who will usually engage members of the Fiends. Typically, there are five of these groups. They respawn every three days. NCR troopers also use the control towers as sniper's nests, assisting or shooting at the player character, depending on their progress in the game or reputation at the time.

It appears that the NCR may have lost ground or pulled troops back from surrounding sandbag barricades stretching to the South Vegas ruins. NCR patrols, however, will go as far as the hill behind Vault 34, as can be seen from a group of three standing around a fire barrel. NCR troops venture into Fiend territory to eradicate their presence, in turn, better securing the perimeter of the camp.

The Camp McCarran terminal building is very large and houses a science lab, an interrogation room, jail, and supply rooms as well as quarters and office space for senior NCR officers such as Colonel Hsu. Within the terminal is the Office of Science and Industry (or OSI) lab, where Dr. Thomas Hildern and Dr. Angela Williams can be found. To the west of the lab is the office of Captain Ronald Curtis.

Upstairs, the player character can find Lieutenant Carrie Boyd and the detention center on the right. The monorail to the Las Vegas Boulevard Station and New Vegas Strip is to the left. The pre-War monorail is still fully functional and allows quick and safe transport between the camp and The Strip. However, only military personnel and VIPs are allowed to use it. The Courier will be allowed to use the monorail if they wear an NCR uniform, are in the company of Craig Boone, or have a good reputation with the NCR.

The pier style concourse that once provided passengers with access to airplanes before the Great War is now used as living quarters for NCR troopers. The concourse is a hexagon-shaped building, positioned between the terminal building and the supply shack. The area contains a dining area, medical station, and the trooper's bunk beds.

The Stairway in the ATC Tower

A side view of the room

Runway outside of walls

Trucks sitting outside the concourse

Trucks near the entrance

Jet planes outside the supply shack 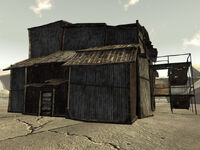 Fighter jet hanging in the terminal

Another view of the jet 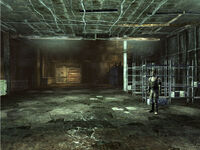 Interior of the supply shack 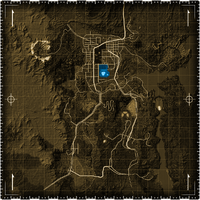 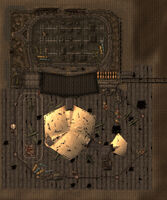