Flags of Our Foul-Ups
Return to Sender
No, Not Much

Fallout: New Vegas
“It was on the front line for a while. Only resort in New Vegas no one wanted to get sent to. Doesn't have that kind of importance anymore, though. They pulled most of the troops out of there after we took the Hoover Dam.”— Craig Boone

Camp Golf is an New California Republic military base, located on the north shore of Lake Las Vegas, east of the Grub n' Gulp rest stop. It serves as the headquarters for the NCR Rangers in the Mojave Wasteland in 2281.

Established in and around the House Resort and accompanying golf course belonging to Robert House before the War, Camp Golf was the frontlines of the NCR's fight against Caesar's Legion during the First Battle of Hoover Dam in 2277. However, as its strategic value waned and it found itself miles behind the frontline, it subsequently became a dump of sorts for the NCR Army. Underperforming soldiers are sent to Camp Golf to be shaped up by its drill instructors.

The matter is different for NCR Rangers. The actual resort building has been adopted as their regional headquarters, doubling as communication and quartermaster hub. This causes some tension between rangers and troopers, the latter having to camp in military tents on the dilapidated golf course, while the former enjoy all the luxuries a pre-War resort provides.

The NCR maintains a heavy presence here, guarding a large water pipe that extends to the north, providing water to the NCR sharecropper farms and ensuring a constant supply of food for the NCR.

The camp consists of several tents on the golf course west of the resort building, near which the command tent, infirmary, mess hall, and shooting range are located. The perimeter is secured by several watchtowers manned by sentries at all times. South of the resort, the main pipeline providing water to New Vegas exits into Lake Mead. 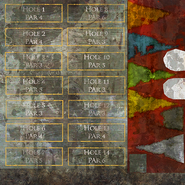