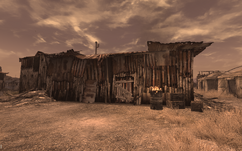 The metal shack is located in the southernmost building in Camp Forlorn Hope. It consists of two rooms, including a kitchen on the north end of the building and a dining area on the south side.

As with many NCR buildings, propaganda posters can be seen slathered across the walls. 10 of Spades can sometimes be found in the mess hall after completion of the quest Three-Card Bounty. Several NCR troopers are also found inside.

Add an image to this gallery
Retrieved from "https://fallout.fandom.com/wiki/Camp_Forlorn_Hope_mess_hall?oldid=3166788"
Community content is available under CC-BY-SA unless otherwise noted.