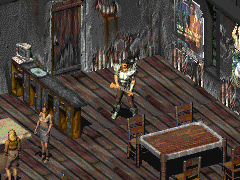 Break up the bar brawl

“Me and my boys are gonna teach these Morningstar creampuffs a lesson. Starting with Blasphemous Bette over there.”

Caminetto is a cocky Kokoweef Miner in 2241.

A thick-set man with the air of a confident fighter surrounding him, Caminetto is a model miner for Kokoweef. He has a tendency to get into brawls with the miners from Morningstar, a rival mine, although they rarely end in total bloodshed. He respects the law enforcement of Redding, in particular Sheriff Earl Marion.

Caminetto appears only in Fallout 2.

Retrieved from "https://fallout.fandom.com/wiki/Caminetto?oldid=3273908"
Community content is available under CC-BY-SA unless otherwise noted.