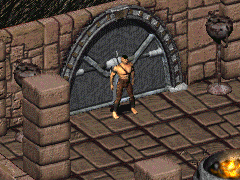 “There will come a time when diplomacy and tact will prove to be useless and your hand must be raised instead. This challenge prepares you to face another human, look him in the eyes, and know that you may have to kill him.”

Cameron is an inhabitant of Arroyo in 2241.

Cameron is a young man with bulging muscles and a very confident air about him.[1] He is a fellow tribesman of the Chosen One, and is an expert in unarmed combat, believing that fighting with weapons desensitizes a warrior to the consequence of their actions.

He can teach the Chosen One some Unarmed and Melee Weapons skills if their Agility is less than or equal to 6, and none of the six combat skills are tagged.

Cameron appears only in Fallout 2.

He is named after Cameron Rapmund, the Australian winner of the Fallout trivia contest.

Retrieved from "https://fallout.fandom.com/wiki/Cameron_(Arroyo)?oldid=3301768"
Community content is available under CC-BY-SA unless otherwise noted.