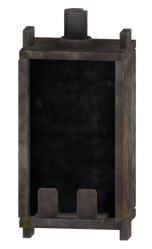 Camera film is classified as a type of ammunition in Fallout: New Vegas but it has no combat application.

Camera film is a celluloid material used in conjunction with a chemical process after exposure to light to produce photographs.

In Fallout: New Vegas, camera film is assigned as "ammunition" for the Codac R9000 camera. It is given to the player along with the camera solely to carry out the quest Classic Inspiration. Initially, 24 "rolls" are provided with additional amounts supplied if the player runs out.

Camera film is exclusively available from Michael Angelo at his workshop on the Strip after initiating the quest Classic Inspiration. If he should ever die for any reason, no further supplies of camera film can ever be obtained unless reloading a previous saved game.