The Codac R9000 camera is a miscellaneous item in Fallout 3.

The camera is a twin-lens reflex camera with a fixed focus. Exposure time is controlled by a shutter arm. Illumination is provided by a flashbulb held in a flash holder. After completion of the Broken Steel quest Who Dares Wins, Reginald Rothchild will trade 100 caps and 25 XP per camera in the unmarked quest Getting Ready for Prime Time. It can also be used as Rock-It Launcher ammunition. 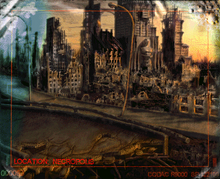