View source
watch 24:51
Fallout Interactive Experience
Do you like this video?
Play Sound
Fallout 4 side quest

000284BC
“Employment opportunities await in the field of scientific research. Shall we begin your application now?”— Molly

Upon entering the Cambridge Polymer Labs, the Sole Survivor is greeted by a Miss Nanny robot named Molly. She asks if they have come to fill a job position. By answering yes, Molly will give the player character a one-question survey for qualification, asking whether or not the player character has any research experience. She will assign a job and provide a uniform (set of clothing and items) based on the answer given:

Molly will then ask if the Sole Survivor would like an orientation, which is optional. If they agree, she will move into a side room with a broken slide projector and relate the history of the company. The Sole Survivor is asked to change into suitable attire and Molly leads the player character through a changing area with sets of lockers, then they are told to proceed to the cleanroom.

If one brings Curie for the quest, a possible affection boost of 35 points is possible for completing the research. She must be selected as a companion from this point onward to receive the boost. In addition, one must not override the lockdown until the research is complete. The affection boost will not happen unless the experiment is completed first.

As soon as the Sole Survivor enters the cleanroom, Molly locks the door and informs the player character that Director Elwood has issued a mandatory overtime edict to the staff and that no one may leave the laboratory until the project has been completed. The room will then fill with high-level radiation, though Molly will decontaminate it shortly after. The player character may then ask Molly questions, but her responses are generally that the player character should look at the research already done and see if it can be moved forward.

Just past the cleanroom, the player character will come to a room with a terminal directly in front and a large machine called the polymer coating applicator filling the right side of the room. The terminal will have the research data of the experiment that's been performed up to this point.

There is a door leading from the room with the applicator out into the main atrium, which is filled with feral ghouls. Up to ten ghouls will attack at once, but once they are dead, the Sole Survivor is free to explore with only occasional interference from additional ghouls elsewhere in the facility.

Up the stairs on the second level and turning around, there will be two doors at the end of walkways on either side. At the end of the left walkway is an office space in which the player character will find unidentified sample 49 (cobalt) sitting on a desk. Near this desk is a ramp leading into the ceiling ducts, which will grant access to the aforementioned righthand office, if one is unable to hack the Expert-level terminal at the door outside. Deal with the ghoul inhabitant, disable the tripwire and mines before they can go off, then look around the lab.

This is Dr. Wilfred Bergman's lab and the final reagent, unknown sample 611 (gold), can be found sitting on a desk next to a terminal. At this point, one has two options:

Return to the applicator room and insert the components. Insert unidentified sample 3111 (lithium hydride) and unidentified sample 611 (gold) into the chemical reagent slots on the left and U-238 into the isotope sample slot on the right. Use the terminal to start the fabrication process by selecting "run loaded fabrication routine." One can watch the polymer lining be applied to a piece of power armor, producing the piezonucleic power armor, a unique legendary power armor piece. Collect it on the far right and present it to Molly.

With the project completed successfully, she will unlock the cleanroom, adding that the director will be impressed and will want to meet the Sole Survivor. Following her will lead to the director's office on the second floor of the main entrance area. Upon opening the door, the director, now a feral ghoul, tries to attack the Sole Survivor. Molly intervenes, re-informing the director of company policies about assaulting coworkers before killing him with her saw arm.

Alternatively, activating the terminal in Dr. Bergman's lab and accessing the "facility defense system" directory will provide the opportunity to use the emergency override, which will open the cleanroom and fulfill the optional objective of finding another way out of the facility. It will also activate all defenses including turrets and Molly, resulting in the player character having to fight their way out of the facility. 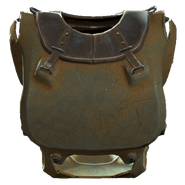