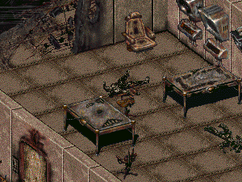 Camarillo was a member of the Brotherhood of Steel.

Camarillo was part of a group led by Sergeant Dennis Allen and two other knights, Soto and Jensen, that explored the southeast ruins of West Tek, called The Glow, after being hit by a nuclear bomb, for artifacts.

During this time, Camarillo lost it and wandered off into the glowing halls in search of the horrifying Gehenna while holding all the teams' anti-radiation medicine.[1][2]

Camarillo's remains appear only in Fallout.

Retrieved from "https://fallout.fandom.com/wiki/Camarillo?oldid=3237731"
Community content is available under CC-BY-SA unless otherwise noted.