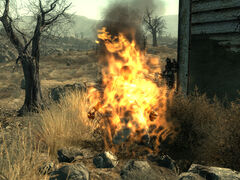 Calverton is an unmarked location in the Capital Wasteland in 2277, consisting of a small abandoned town with a chapel southwest of Jury Street Metro station.

The town consists of three buildings, including a diner, Gold Ribbon Grocers, a church, and after Broken Steel is installed, Hank's Electrical Supply. The church is easily spotted from the southwest. To the right of the church is a small graveyard fenced off by a broken white picket fence. In the church entrance is a trip wire, which triggers a shotgun trap, and in the back is a grenade trap triggered by a pressure plate. There is also a podium, some barrels, and a few beds. There is a captive to the left of the bed.

Calverton appears only in Fallout 3.