Callville Bay is a former boat launch beside Lake Mead, northeast of the scavenger platform in the Mojave Wasteland in 2281.

Home to Captain Dean Boat Rentals, it was once a small port and boat launch, offering Poseidon U-235 outboard motors. Now Callville Bay is a derelict no-man's land overrun by cazadores, that nest inside the remains of the corrugated metal warehouse.[1]

Callville Bay is a boating harbor serving Lake Mead. It consists of a ruined boathouse and a store named Captain Dean Boat Rentals. The store contains a few bottle caps, a locked safe and a first aid box guarded by giant rats. In the boathouse, the Courier will find miscellaneous supplies guarded by a group of cazadores, which have established a nest there.

The boat launch with tow winch jutting out into Lake Mead is where Loyal's detonator is used to activate the deployable ballast as part of the quest Volare! Loyal then plans on having robots break the plane down into pieces and move it up from Callville Bay to Nellis.[2]

Boathouse from the front

Other side of the boathouse

Close up of warning

Locomotive on the tracks 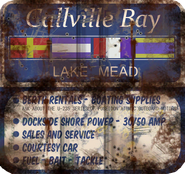