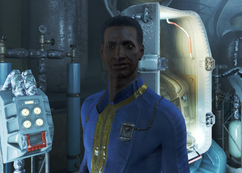 “So glad I signed up. Best decision of my life.”

Mr. Callahan was a resident of Sanctuary Hills prior to the Great War in 2077.

Mr. Callahan, along with Mrs. Callahan, was one of the citizens of Sanctuary Hills that both secured a place in the vault program and made it to Vault 111 before the nuclear bomb exploded.

Along with the other cryogenically frozen occupants of Vault 111, he died due to asphyxiation when the life support to the cryo pods was cut in 2227 by the Institute during Shaun's kidnapping.[1]

The overseer's terminal mentions a malfunction in Pod C3 where the occupant had heart palpitations and nearly thawed out, and refers to the occupant as "her" even though Mr. Callahan is the dweller assigned to this pod.

Mr. Callahan appears only in Fallout 4.

Mr. Callahan in the cryopod
Add an image to this gallery

Retrieved from "https://fallout.fandom.com/wiki/Callahan_(male)?oldid=3296503"
Community content is available under CC-BY-SA unless otherwise noted.