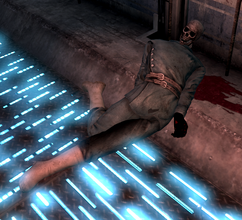 “Everything is under control down here. If I need your assistance, I'll let you know.”— Dr. Calis, from the correspondence with Captain Hamm

Dr. Calis was the chief scientist in the X-13 research facility in Big MT.

Dr. Calis was the chief scientist in charge of the X-13 research facility under the command of Dr. 0 in Big MT. All that is known about him can be found on the terminals in said facility.

He asked Captain Hamm, Big Mountain's security chief, to provide a shipment of cattle prods in order to control the night stalkers, who were becoming increasingly aggressive. Eventually, he evidently decided to face the night stalkers directly, an error in judgement that cost him his life. His skeleton, still clad in a lab uniform, can be found sprawled on the ground outside the night stalkers den. It is also possible that this event allowed the night stalkers to escape into the wild, leading to the further death of most of the scientists in Big MT with the escape of cazadores.

Dr. Calis was survived by evidently no one, and recalled with scorn by his colleagues, whose negative comments can be found on terminals scattered around the facility.

When asked why he created the night stalkers, Dr. Borous states that Calis dared him to splice together mountain lions, eagles, and condors, which somehow lead to a combination of coyotes and rattlesnakes.

Dr. Calis is mentioned in numerous terminals in the X-13 research facility and also appears as a skeleton in the Fallout: New Vegas add-on Old World Blues. He can be found outside of the entrance to the former night stalker's reserve. 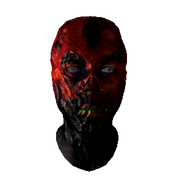 G.E.C.K. rendered face of Calis with his apparel skull removed.
Add an image to this gallery
Retrieved from "https://fallout.fandom.com/wiki/Calis?oldid=2885705"
Community content is available under CC-BY-SA unless otherwise noted.