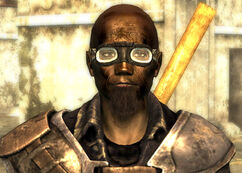 Caleb was born in 2245 and was a slave until he escaped 2269, joining a raider band shortly after. When he heard about Hannibal Hamlin and the Temple of the Union, he promptly left the raiders and joined Hannibal. He is the first of Hannibal's followers and has some experience as a stonecutter. Caleb prefers to use melee weapons but knows his way around guns.[1]

Retrieved from "https://fallout.fandom.com/wiki/Caleb_Smith?oldid=2178968"
Community content is available under CC-BY-SA unless otherwise noted.