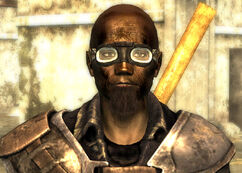 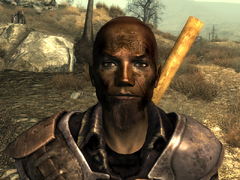 Caleb was born in 2245 and was a slave until he escaped in 2269. He was captured along with John and Liesel when they tried to escape. During his time as a slave, his master taught him the art of stone cutting. When he ran away from his master, he fell into a band of raiders.[1] Once he heard about Hannibal Hamlin and the Temple of the Union however, he promptly left the raiders and joined Hannibal. He is the first of Hannibal's followers and uses the skills he learned from his master to restore any stone structure Hannibal asks of him. Caleb prefers to use melee weapons but knows his way around guns.[2]

Caleb is a member of the Temple of the Union and will defend it and the people in it with his life.[3]

The character is a reference to Caleb B. Smith, who served as President Abraham Lincoln's Secretary of the Interior from 1861 to 1863.

Retrieved from "https://fallout.fandom.com/wiki/Caleb_Smith?oldid=3345847"
Community content is available under CC-BY-SA unless otherwise noted.