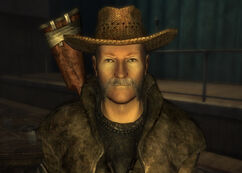 Caleb without his hat

“Heh, so the Garrets sent you to track me down? What a joke.”

Caleb McCaffery is a bounty hunter living near New Vegas in 2281.

McCaffery formerly worked at the Atomic Wrangler Casino for the Garrets, but quit recently. Before quitting Caleb stole a large sum of caps, leading the Garrets to send the Courier to deal with him.[1]

Caleb is incredibly arrogant and condescending, deriding the Courier as beneath his notice.[2] This is apparently how he treats nearly everyone, as he's made a reputation as being a pig.[3] McCaffery always refers to the Courier as a kid (despite their actual age) showing just how little he cares about them. When he gets called out on this, he makes a veiled threat and essentially accuses the Courier of being rude themselves.[4] Caleb also only got into bounty hunting because of his love of the fight (and possibly of killing), which speaks to kind of person he really is, and a Speech check is required to deal with him in any way other than violently.[5]

If the player character kills Caesar, Caleb will say "All hail the slayer of Caesar!"