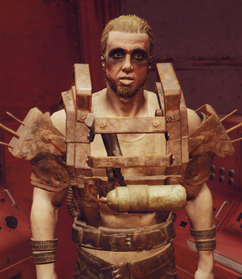 Cheating Death
From Russia With Lev

During From Russia With Lev

Caleb Fisher is a raider at the Crater in Appalachia in 2103.

Fisher was born and raised among the Amish, which are a group of traditionalist Christian communities. After the Great War, he began to lose his faith, as many church leaders saw their survival as vindication of their beliefs. Not wanting to be associated with such a mindset, Fisher used his Rumspringa, an Amish coming-of-age process, to leave the church.[1]

After leaving, Fisher joined with Lev's gang before he met Meg's raiders, and his time with them convinced him that his faith was detrimental to his survival. He likes Lev's ruthless style of leadership more than Meg, believing that her "heart" is a risk. However, he knows that Lev would not hesitate to get rid of Lou, so he often sides with Meg to keep Lev in line and preserve his friendship with Lou.

Despite his upbringing, he is highly skilled with technology. He is responsible for the thankless job of setting up and maintaining much of the Crater's infrastructure, but often complains due to the constant amount of work shoved on him by the other raiders.[2] He was the one who created Weasel's vocal collar, adapted from the research of Eddie Harrison which he found in Monongah.[3] He also refurbished an old suit of Brotherhood of Steel power armor into raider power armor.[4]

Caleb Fisher appears only in Fallout 76, introduced in the Wastelanders update.

Retrieved from "https://fallout.fandom.com/wiki/Caleb_Fisher?oldid=3426861"
Community content is available under CC-BY-SA unless otherwise noted.