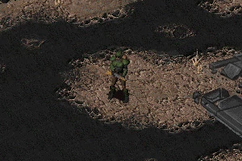 Free Adytum from the Regulators

“I got better things to do than get out there and kill a few skags. Take more time showerin' up afterwards than dealin' with them.”

Caleb is the leader of the Regulators in Adytum around 2161.

Caleb is a stern man in his thirties. He ordered Cravotta, a subordinate Regulator, to kill Jon Zimmerman's son, Jason for infiltrating the perimeter of the Regulators' base. He subsequently framed the Blades for the crime. He hates the other gangs in the Boneyard, particularly the Blades, as they undermine the authority of the Regulators.

He, along with the Regulators, will turn hostile if the Vault Dweller decides to show Jon the incriminating holodisk for the quest Free Adytum from the Regulators.

Caleb appears only in Fallout.

Retrieved from "https://fallout.fandom.com/wiki/Caleb_(Fallout)?oldid=3354459"
Community content is available under CC-BY-SA unless otherwise noted.