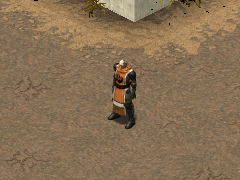 “What is your PROBLEM WARRIOR? If you don't GET THE FUCK MOVING you better STAND THE FUCK BY FOR ME TO stick my foot SO FAR UP YOUR ASS that you'll be tasting the CRAP THAT GROWS BETWEEN MY TOES!!!!! DO YOU UNDERSTAND?!?!?!”

Caldriss "Deadeyes" Hemlock is a Brotherhood of Steel auditor general in 2197.

Caldriss is a thin, sinewy man in his fifties with graying hair, and is mostly bald. His eyes are dead-looking, hence the nickname, and likes to speak with strange pauses. He was one of the Brotherhood's deadliest assassins before his retirement from active duty. He has a french accent, not unlike that of Jean Reno.[1] His calculating nature and an eye for details have found him a job where his attention to details profited him - an auditor and collector of dues for the Brotherhood. Interestingly, he is one of the Brotherhood members who actually met the Vault Dweller.

He was sent to the town of Cold Water to collect three stolen power armors and the bodies of the thieves, after the Warrior finished his mission there. At the time, he didn't think much of it though. Later in the game he can be found in Bunker Epsilon.

Retrieved from "https://fallout.fandom.com/wiki/Caldriss_Hemlock?oldid=2871529"
Community content is available under CC-BY-SA unless otherwise noted.