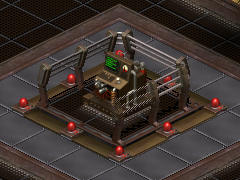 “It is the organic portion of my mainframe that has become corrupted. The degeneration of my symbiotic brains has corrupted eighty-five percent of main protocol programming. It would take only one brain to bring my organic subsystems back online, but finding a feasible brain has become a problem. I would use a brain from one of Vault 0's residents, but I compute that my CPU would only become less efficient.”

The Calculator is the nexus of Vault 0, controlling its every aspect, designed to spearhead humanity's reemergence into the post-nuclear America. Designed before the ZAX series entered the field, the Calculator is not an actual artificial intelligence, but a supercomputer using organic human brains for processing power.[1]

To coordinate the effort and control the functioning of the Vault, the Calculator was created as an advanced supercomputer using an electro-organic terminal to link its central processing unit to the brain stored in pseudo-cryonic conditions, fed specifically formulated nutrients to sustain suspended life. This scheme was intended to assist the Calculator in Vault management, including life support, food production and distribution, pacification robot protocol, and Vault 0 defenses. Ultimately, it would also aid in executing the Exodus Protocol when outside temperatures, radiation levels and poison particle counts returned to normal.[2]

However, these lofty goals were compromised. Before the Great War broke out, the committee responsible for managing the construction of Vault 0 introduced budget cuts (by a 30-3 majority, no less), reducing the sum allocated for computer backup systems from 24 billion dollars to 2.3 billion, to cover pay increases of senior committee members. Additional plans called for a modification of compartments that were designated for backup computer and life support systems into senior vault personnel leisure facilities, including several top quality restaurants with 10,000 square feet of cold storage, seven smoke rooms with piano bars and two subterranean hunting grounds stocked with rare animals purchased from world renowned zoos. The renovation had a projected cost of 12.4 billion dollars. All due to a "dwindling" chance of nuclear war ever taking place.[3]

On October 23, 2077, history proved them wrong. As the nuclear devastation reduced the United States of America to ash, the Calculator ended up in what can be best called a slumber. It did not react to the nuclear holocaust, instead silently remaining hidden beneath Cheyenne Mountain, along with its robotic servants and pre-War charges slumbering in cryonic suspension. It slept for over a century.

It all changed in 2196,[4] when a group of super mutants from Gammorin's forces breached Vault 0's perimeter. This action activated the Emergency Pacification Protocol, designed as contingency in the event of substantial foreign military presence on US soil, dangerous mutations or breach in the Vault's defenses. The Calculator promptly introduced the invaders to a behemoth and began executing routines included in the protocol.[5][6] The awakening of the Calculator also exposed the blunders made by the committee overseeing its construction. The lack of backup computer systems impaired its functioning and damaged the electro-organic linking terminal resulting in 63% of Vault 0's population dead, with a further 15% suffering from severe brain damage, to the point of being unable to care for themselves. Among the dead were First Scientist Napstarsky and Second Scientist Jones, the only people able to repair the damage.[7] Constrained by its inflexible programming and lack of actual intelligence, the Calculator coldly executed the Pacification Protocol, expanding its operations into the Buena Vista nuclear reactor complex and industrial facilities in Canyon City and Great Bend to augment the Vault's own production capabilities.

Menace from the West

Soon, the Chicago region was full of rumors of a Menace from the West, coming to exterminate all life, clashing with raider tribes, settlements and super mutants in its march east of the Rockies. The Calculator discovered a useful ally in a captured Brotherhood of Steel General, Simon Barnaky, who was transformed into a humanoid robobrain and began his service to the Calculator as its adviser and guardian.

The Calculator appears in Fallout Tactics and is mentioned in the Fallout Bible and Fallout: Wasteland Warfare.

“Incidentally, the story of Tactics went through a lot of revisions. For example, my original concept for the main villain, the Calculator, was for it to be a completely unfeeling automated system, not even a computer so much as an engine designed to tick over and perform certain tasks after doomsday. Totally implacable, and therefore the fault of everything bad that happens is still in the hands of the humans.”— Ed Orman
“The Calculator was designed before the ZAX series, to control and regulate the vault network. Originally, it was supposed to do just that, but it eventually grew to the point where it could control the vaults individually (had the connections with each vault remained constant).”— Ed Orman
“As far as I know the Calculator was completely unique, and unrelated to Zax, but can't find any documentation to support either side of the theory. I think it's fairly safe to assume Zax and the Calculator have very little in common.”— Gareth Davies