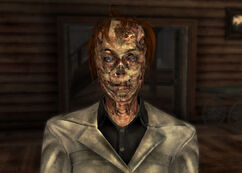 “With Doctor Henry off to rejoin his Enclave friends, he's left it up to me to carry on with the research here.”

Calamity is Dr. Henry's research assistant in Jacobstown in 2281.

Calamity is a ghoul doctor stationed in Jacobstown as Dr. Henry's research assistant looking for a cure for the nightkin's aggressive tendencies. She can be found in the Jacobstown lodge.

She has lived a long time and changes her name and job every decade or so to stop getting bored. She chose the name Calamity because she thought it was nice. Although she has never tried a job in science before, she found she was really quite good at it, "according to Doctor Henry."

Retrieved from "https://fallout.fandom.com/wiki/Calamity?oldid=3124350"
Community content is available under CC-BY-SA unless otherwise noted.